So just a few days after posting about the advantages of kids writing Christmas cards to their friends and classmates. I came across a story that shocked me. 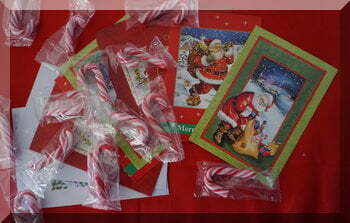 Many children add a candy cane to friends’ Christmas cards

So the story is that a nine year old boy spent about two hours writing out cards for everyone in his class, including a picture for each child and adding in a candy cane each.

I am horrified that some kids could be so rude and disrespectful as to reject cards given to them in a spirit of generosity and care.

They could have at least taken the cards and thrown them in the recycling bin at home instead of refusing to take them. And as for taking the gift without the card – I just can’t comprehend being so rude.

That boy is like my children – he obviously put thought and effort into writing those cards and he deserved better treatment than he got. Even if you don’t like Christmas or cards, surely you can be taught to appreciate the thought and effort?

I don’t even accept that people who don’t believe in Christmas should act this way – if you refuse the card, you must also refuse the candy cane I’d say. And you can accept the card in the spirit it was given rather than take some high ground of not believing.

My son and I discussed cards for one of his classmates who is Muslim – he is aware she does not believe in Christmas and didn’t want to offend her with a card. However, I said let’s include her by giving her a happy new year card instead. Either way I can’t see her or her mother refusing to take the card as they understand it was out of my son’s respect she was given the card.

I have never before heard of anyone accepting only part of a gift and refusing the card attached. I certainly would not act this way nor allow my children to do so (not that they would – they always bring cards home proudly and want to display them).

Am I just lucky enough to be surrounded by people with more manners and appreciation for being given something? Or is this a rare instance of rudeness? In other words, have you ever come across this sort of behaviour?