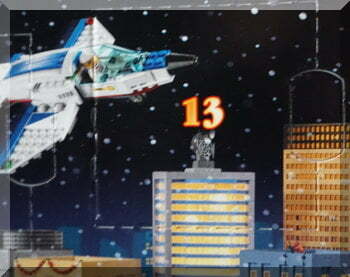 So we’re up to day 13 now, and excitement is building as we’re getting closer to Christmas – and summer holidays with only five school days left.

Does anyone really eat ice-creams while skiing and skating?

My son, on the other hand, got a robber with a crowbar and two hundred dollars in a sack. Don’t get me wrong, my son was happy enough finding that, but it doesn’t feel very Christmassy! Let’s hope he doesn’t steal the Christmas tree or presents!

If you missed what the calendars gave us yesterday, you can catch up on day twelve. Read the introduction to our Lego advent reviews for the whole picture.