A Bellbird in a Flame Tree – Christmas book review

A Bellbird in a flame tree Age group: 3 and above

An Aussie version of the twelve days of Christmas, illustrator Kilmeny Niland includes not one partridge in sight!

On the twelfth day of Christmas, a Christmas true love sends a bellbird in an Illawarra flame tree (Brachychiton acerifolius). This is followed by koalas, dingoes, quokkas, numbats and other Australian creatures over the course of twelve days leading up to Christmas.

While the tune and concept are well known, it is nice to have 12 days of Christmas show Australian animals and trees rather than English ones. And Aussie children certainly know more about koalas and wallabies than leaping lords and turtle doves! 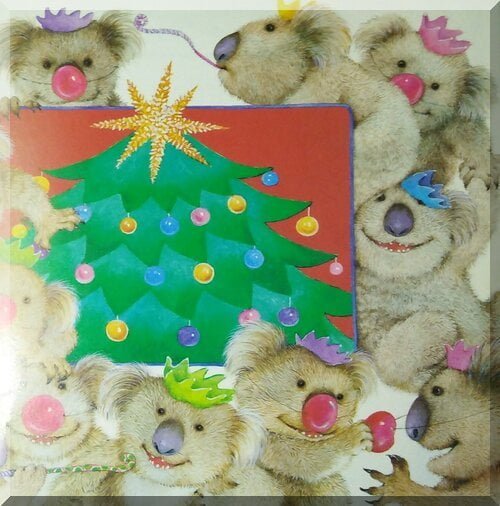 Niland has chosen animals well known but also fitting to the original tune. His illustrations show a true knowledge of the animals, but with a cheeky twist with grinning dingoes and koalas! Great for Aussie kids to feel it’s real and for non Aussies to learn about our native animals.

There’s not much to say about the plot, but each page has a Christmas element to the images, such as lorikeets carrying a paper chain, crocodiles singing carols by candlelight and numbats knitting stockings for a mantlepiece.

Whilst the CD is missing from my version, the song is well known enough to sing without the CD, or use any other version of the song if needed. Alternatively, play the music yourself as a score (as arranged by Elizabeth Hemphill) is included at the back of the book.

Would I recommend it? Yes, I do recommend it as simple story well suited to Aussie kids. The illustrations are bright and cheerful, and you have the choice to read or sing this book!