I made my first cake pops today. 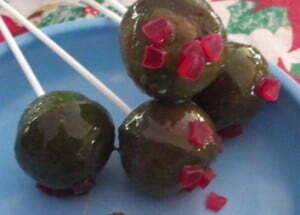 Some red and green Christmas cheer via cake pops

I may be a bit behind the trends but at least I bought the trays a little while ago!

My son’s birthday is next month and I am planning some themed cake pops for his party so I figured I should have a trial run or two first. Thus, I made some cake pops today.

Of course, as a test run, I didn’t touch his birthday theme and gave them a Christmassy touch instead!

They were fun to make and easy enough with my children so this could be a fun activity to build up the Christmas excitement during December.

So here’s what I learned today…

I made a batch of my usual easy cake and had left overs from the cake pop tray.

Coat in green icing (I used yoghurt, icing sugar and green food dye) – best results by tipping the bowl on its side and rolling the cake around.