A sweet story about a bear who decided to enjoy Christmas rather than hibernate. 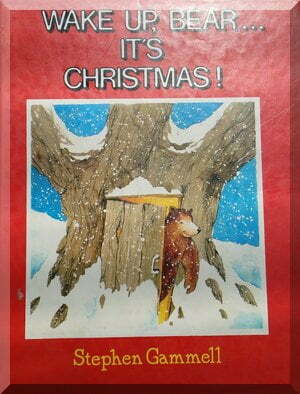 Bear decides that he is missing out each year so he sets an alarm to wake him up on Christmas Eve. As he sits enjoying his fire, an old white-bearded man visits him and takes him on a sleigh ride.

I liked the unusual aspect of this story – a bear waking up from hibernation for Christmas! My five year old and I both thought is strange on page one where it states ‘But he wasn’t going to be sleeping all winter’, but it was quickly explained and made a lovely basis for a story.

There is enough text on each page to keep middle primary kids interested, yet little enough to be enjoyed by younger children as well. Emergent readers could even read it themselves.

Bear has a wonderful Christmas which is a delight to read about, and of course the old man can be assumed to be Santa. It was heart warming and fun, but the timing seemed wrong. If the old man was indeed Santa, how did he have time on Christmas Eve to sit with Bear for hours before going on a sleigh joyride? To me, if the story had been set on Christmas night, it would have been better as then not only does Bear get company and enjoy his Christmas and Santa would be free to do his deliveries, the story would show Santa having a relaxing evening after his big night and that just would have added extra warmth to the book. So, Wake up Bear… it’s Christmas is a lovely book, with nice illustrations and rhyming text, that would be a happy addition to any bookshelf.