This is based on a recipe I used for my daughter’s Frozen party last year. We thought it would be fun to create some red and green trolls to help us have a delicious Christmas, and it was worth the experiment as they tasted yummy! 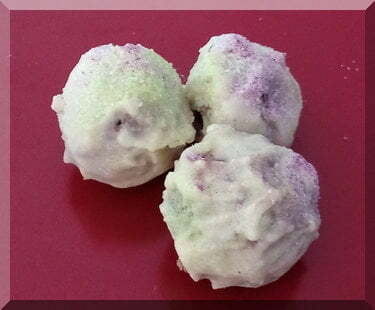 Crush the biscuits into crumbs (use a rolling pin to smash them or a blender – I used my red hand blender from Tupperware).

Add in the cream cheese, cranberries and 1 tablespoon of green jelly crystals, and mix until they are all blended together. Form the mixture into balls. Ideally, put them in the fridge for a little while as it makes them easier to work with if chilled.

Melt the white chocolate in a small bowl.

Roll each ball into the melted chocolate until it is covered. using a spoon to transfer the troll balls from the melted chocolate to the jelly plate. Rolling balls in chocolate can lead to messy little fingers!

Roll the ball in jelly crystals – you can make some balls red and some green, or use both colours on each ball. This is the messy bit, especially if little hands get involved 🙂 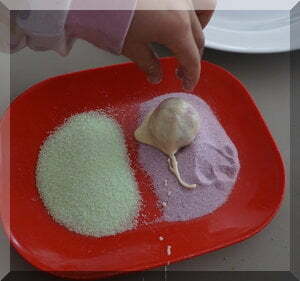 Pop each ball on the jelly crystals then roll to coat – it doesn’t look this neat for long!

Pop them on a plate and the leave the plate in the fridge for half an hour or so to set. Gently break off any dripped chocolate to make the tolls look nicer. remember to store these in the fridge (if they last that long!)

To add more Christmas colour to the balls while eating them, you could also mix in some cut up green lollies (spearmint leaves would give a minty taste, while jelly babies or snakes would add sweetness and texture).

Instead of rolling the balls in jelly crystals (which give colour and glisten), you could try

These are yummy so I hope you enjoy them as much as we did!