A fun novel for children about Santa, a dog and an adventure!

Rudolph is sick so can’t lead the reindeer and Santa is staying home on Christmas Eve. But along comes Rover the wonder-dog and maybe he can help Santa…

Definitely a book aimed at children – many adults will find it a bit too silly at times (and perhaps a little predictable) while seven year olds think it is hilarious!

This is actually a sequel to The Giggler Treatment (a New York Times best seller) but I haven’t read that and did not find it a problem. Having said that, if you can get both books I think it would be fun and you may as well read them in order! There is also followed by The Meanwhile Adventures (and you can get all three together in The Rover Adventures).

The book is written as a story but has comments directed at the reader – for example, there are interruptions occasionally and a chapter that progressively gets older… 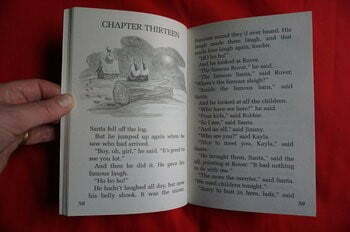 As for the actual story, it is fun. Roddy helps Santa out (even if it took a little convincing), Santa learns he is more important to kids than the presents, and they travel the world in a very logical manner (moving north and south along timelines!)

I laughed at how many sandwiches were made for (and eaten by) Santa, and I loved the idea of elves having sleighs around the world to top up Santa’s main sleigh as he travelled. I might have to ask Santa if that is how he really manages to get so many gifts to so many children!

To keep adults somewhat entertained, there are also various side references that kids won’t fully understand – like borrowing an owl from some Harry kid or getting a bandana from a “very old singer called Bruce Springsteen”!