I saw Santa under the mistletoe in early December – but I didn’t get a kiss!

Yes Mummy kissed Santa, but the mistletoe connection to kissing is more than just a lyric in a 1950s song!

What is the mistletoe tradition anyway?

The Christmas tradition for mistletoe is that if you stand under some mistletoe, you have to kiss anyone standing there with you or near you.

One version of the tradition states men can only kiss the cheek of a woman met under the mistletoe. Then he must remove one berry from the bunch. Once there are no berries left, the mistletoe no longer signifies getting a kiss!

Of course, you can say no to a kiss – or work hard at avoiding standing under the mistletoe! However, the tradition states it is bad luck to refuse a (suitably sedate) kiss.

While it may look funny, especially in any romantic comedy movies, the tradition really only applies to mistletoe hung in a doorway or archway – so anyone carrying it around or having it stuck on their hat can’t expect lots of kisses! 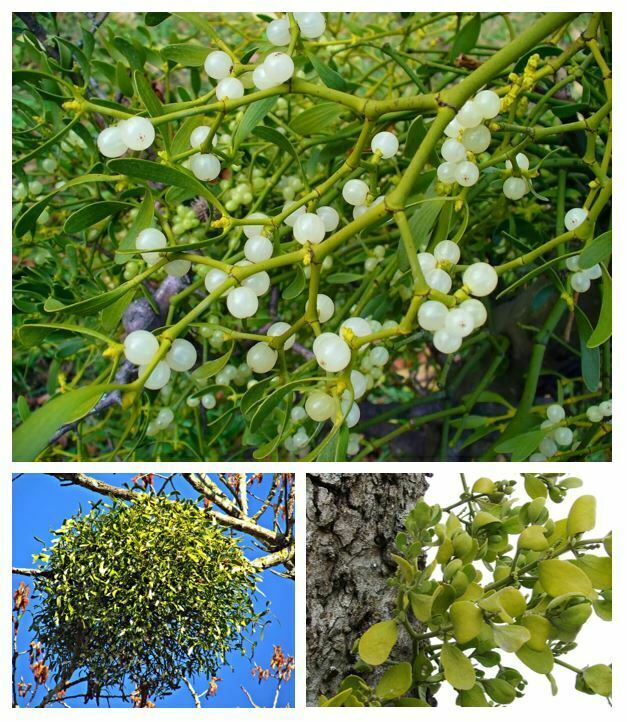 Let’s start by saying that mistletoe is not the same as holly, although people do get them confused as both have an association with Christmas celebrations. Even if you Google mistletoe you see lots of images of red-berried holly!

So mistletoe is an evergreen plant with white berries that grows on the trunks of other trees – in other words, it is a parasite. It is spread by birds eating the berries and leaving the sticky residue on trees they land on.

It is commonly found on apple, lime, hawthorn, linden, willow and poplar trees in Europe, and less commonly on Oak trees. There are many species of mistletoe, including a number that grow in Australia (but not in Tasmania interestingly!)

Mistletoe uses the host tree for water and nutrients but photosynthesises to produce its own energy – not all parasitic plants do this.

While the berries have been used medicinally for centuries, it is important to know that Mistletoe stems and leaves are toxic. Eating mistletoe can lead to blurred vision, stomach pains, nausea, vomiting, diarrhoea and drowsiness, so be very careful to keep it out of reach of children and pets.

How has mistletoe been linked with Christmas?

Mistletoe has been linked to Norse  mythology (a symbol of love and friendship), Celtic mythology, ancient Druids (in a fertility ritual) and was a pagan holy plant. In medieval times, it was used to ward off bad spirits during December (thus the Christmas connection now) and burnt afterwards.

As mistletoe is green and healthy during winter when the host tree would be bare and dead-looking, it is perhaps not so surprising that people were in awe of it and saw it as somehow mystical and powerful.

Kissing under mistletoe may have been around since the celebrations of Saturnalia (a Roman pagan ritual), but certainly since the eighteenth century. It was probably a bigger attraction in times when touching and kissing while you were single was frowned upon.