Obviously, it is an igloo made out of chocolate, and decorated for Christmas!

Making an igloo from chocolate…

So a friend came across a Cadbury competition where you needed to create a Christmas house from chocolate. As lovers of both Christmas and chocolate, we couldn’t resist and set a time to create our chocolate house.

As we sat there with our mounds of chocolate (four 350g blocks and a 250g block of chocolate, plus some white chocolate melts and lollies), we had the idea of making an igloo from individual pieces of chocolate instead of just sticking together big blocks. Let’s face it, Santa lives at the North Pole so a Christmas igloo seems reasonable – and slabs of gingerbread to make a house is one thing, but a gingerbread igloo wasn’t going to happen!

Of course, making an igloo took more than the 40 minutes estimated for a Cadbury Christmas house!

We broke blocks of chocolate into pieces then formed the igloo using more chocolate as the mortar. It was our first time building an igloo so we made the first rows a bit too upright (ie we should have started the inwards slant sooner) but it worked out in the end.

We went with a flat roof as we weren’t sure we had enough chocolate left nor confident of our engineering skills to get it to curve the whole way in 🙂 But the flat rood made adding a chimney easier!

Adding decorations was easier – melted white chocolate for snow, cut up snakes to make a wreath, sour straps to make garlands of tinsel, cut up jelly lollies to make lights and some milk bottles to be the penguins at the door. And we mustn’t forget Freddo was inside the chocolate igloo (who else could live inside a chocolate building?) Why a frog in an igloo?

Ok, there aren’t a lot of frogs roaming around the North Pole waiting for Santa to drop in, but Freddo is made of chocolate and seemed the right resident for the house! 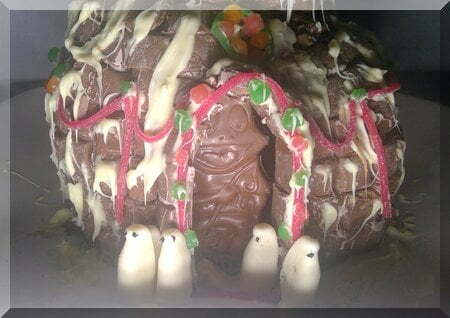 Seeing Freddo inside the igloo, my eight year old decided there was a story behind the frog. She wrote a lovely story about a little frog who ended up at the North Pole and built himself an igloo to live in.

It was also my daughter who thought of the penguins – I was thinking of milk bottles at the front door to suit the old milk deliveries but she saw them as penguins which was a much better idea! A little black icing to make eyes, and Freddo had some company!

So, that is our Christmas chocolate igloo – what do you think? It won’t win any architect awards, but I think it is fun and a very good first igloo building attempt! Maybe you can try making a chocolate Christmas igloo – if you do, we’d love to see photos!

What other alternative Christmas houses have you seen or created? 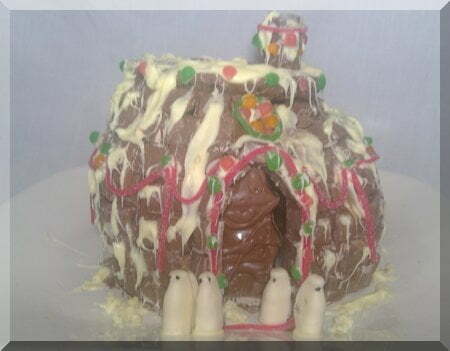 Freddo stuck in his chocolate Christmas igloo in a snow storm!