I went away with a friend and our children over the long weekend. Once the kids were all settled in bed, we watched a Christmas movie each night which was fun.

Angels in the snow

A 2015 movie from George Erschbamer, Angels in the snow is classed as a children and family movie and a drama, and goes for about one and a half hours. It stars Kirsty Swanson, Chris Potter and Colin Lawrence.

The story is based on a book by Rexanne Becnal, also called Angels in the Snow, although the names are different and the book blurb doesn’t hint at the same twist as seen in the movie.

Rich businessman Charles has built a ‘cabin’ in the woods to surprise his wife and children. Their first trip to the cabin is for a Christmas holiday together, but a blizzard quickly turns things cold. A knock at the door overnight, welcomes the stranded Tucker family into the ‘cabin’ (actually a luxurious two story house) and thus the two families spend Christmas together.

Charles continues to work during their holiday – alienating his teens by insisting they go tech free when he can’t manage it himself – and his wife is obviously unhappy with the state of things. On the other hand, the Tuckers are a loving family and set a very different example for impressionable (and precocious) eight year old Emily. Slowly, the Tuckers influence the Montgomerys and both families make a tight bond – but there are some strange comments and looks from the Tuckers that hint not all is as expected.

The movie has the message of communicating and spending time with the people you love, which is a valid message, although it was perhaps a bit heavy handed in this case.

Kids making Christmas crafts is a highlight of this movie

Some of the scenery is this movie was spectacular, and there are some nice scenes like where the kids all work together to make decorations for the Christmas tree. And there is certainly a feel good element of the Montgomery family finding their way back to each other.

But… the ending is not fun. The twist, although we saw it coming, was unbelievable and shallow, and the follow up scenes to explain it were painful to watch. I can’t say I liked most of the Montgomery family (mum was self absorbed and weepy, the son was arrogant, Emily too Pollyanna-ish to fit her family and the teen daughter was superficial) although Charles was somewhat redeemed by his connection to Bella, and the Tuckers were all lovely.

And it was a bit harsh to send the Tuckers out after the blizzard, without blankets, on a two hour walk back to their damaged car! Charles perhaps didn’t learn as much as we thought we had!

It is rated ‘family’ but kids will be bored by all the talking and may be upset or challenged by the twist at the end, so I’d leave it as an adult movie. Then again, I think I’d just leave it altogether as there are just too many weaknesses in it.

If you have seen it, what did you think? Would you recommend it to anyone?

Released on 2 November (the day before we watched it so this is a very new movie!), The Holiday Calendar is a Netflix movie starring Kat Graham, Ethan Peck, Quincy Brown and Ron Cephas Jones.

Abby (played by Kat Graham) lives in a small town and works for Mr Singh as a photographer rather than as the artistic photographer she wishes to be. Her best friend, Josh, is also a photographer and just returned from far places as a successful travel blogger.

Abby receives an antique advent calendar from her Gramps. The calendar is beautiful and doors only open as each new day starts, showing a little toy. Along with Abby, we learn that the calendar is magical and perhaps predicts the future with the toy produced each day. 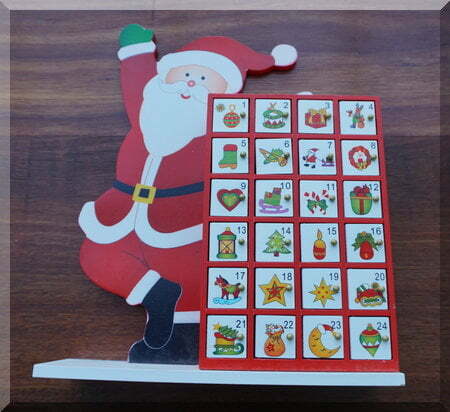 A simpler advent calendar than in the movie, but I like it!

The movie has Christmas, romance, magic, family and self-realisations about dreams. It has some pretty scenes and the advent calendar itself is lovely. I do like that there was a diverse range of people and that some characters were more than stereotypes (for example, Mr Singh is a bit of the grumpy old boss out for a buck but also actually cares about the kids enjoying a visit with Santa).

I would have liked to have seen more of the advent calendar items – the first few days are shown but after that we only saw a couple of them. Sure, doing a day by day recap may get a bit boring in a movie, but a few shots with all the toys in front of the calendar or something would have been a nice touch.

The outcome was somewhat predictable but what do you expect in a feel-good Christmas movie, lol! It is comfortable and cosy, with no fake threat to Christmas, the town or Abby’s family, so it adds up to a nice movie – unlikely I’d watch it again but we had fun watching it.

I guess I will just have to watch some other Christmas movies to find better ones I can enjoy!