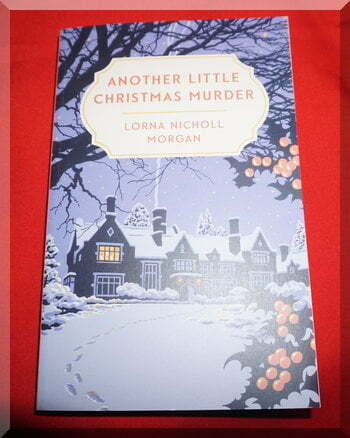 A mystery read with no real connection to Christmas…

Therese Brown unexpectedly plays host to 8 extra people due to a blizzard on treacherous roads beside her house on the same night that her ill husband dies – but not all goes as one would expect.

This story takes place over a few days in December along a deserted road in Yorkshire. At the end, two characters drive off to a family Christmas gathering. Unfortunately, that is the entire Christmas connection for this book.  Apparently, this is a publisher effect as the original version was actually called Another little murder.

Being written in 1947, the remote house is truly remote without mobile phones or even a landline, and the house doesn’t even have electric lighting to add further atmosphere. It is a simpler plot and less gruesome than many modern crime books, but that didn’t stop my enjoyment of it.

The motive behind the crimes was a complete surprise, which is unusual in the crime genre, but clues and the culprits are present throughout. It is a bit ‘secret seven’ like with people bumbling around at night but that feels like the period.

It was a bit strange to have so many people turn up at Wintry Wold – why were so many people on this remote road so far into a storm? – but it kept the story moving and the plot hidden.

Would I recommend it? As a Christmas book, obviously not! And as a serious crime book with a plot to get engrossed in, no not really. As a pleasant read in front of a winter fire, yes I would so maybe you can pop it in someone’s Christmas stocking this year!