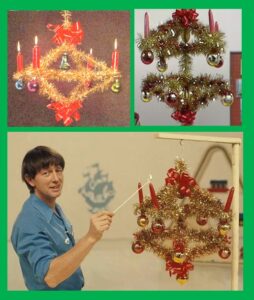 I remember watching the TV show Blue Peter as a kid. That was in England – I’m not sure if you watched it in Australia.

I always knew it was almost Christmas when Blue Peter started lighting candle on the candle garland (or maybe it was called  an advent crown?) It was made of metal coat hangers and tinsel, and so many kids I knew made one at least once!

If you would like to create an advent crown of your own, the Blue Peter site has the instructions.

Lighting the candles at school

When I was first teaching, the school had an advent crown which the Head would light during assembly.

One year she lit the candle nearest to her then reached to light one further away, setting her sleeve on fire in the process. She was TOTALLY unaware of what she had done!

The pianist leapt up and patted her sleeve fire out, only to be greeted by the Head saying indignantly, “Mrs ***** what on earth are you doing. Stop it!!!!”

Such was the children’s fear/love (or whatever it was) of the Head, not one of them laughed, gasped or did anything – unlike the staff who were biting their cheeks! True story – one of many!!!