Tinsel ~ the girls who invented Christmas A Christmas book with female heroes was a must read for me, and it didn’t disappoint.

Two poor girls in London meet each, share a mince pie and change the world! Meanwhile, there are little details in the story that link to the more widely known Christmas traditions. So could it be that we have the Christmas Eve story all wrong? Did two girls invent Christmas instead of Santa?

The book starts with a very sad Christmas image. Blanche lives alone under a bridge and spends the day counting to distract herself. This particular Christmas Eve, she ends up meeting another girl, Rinki, who shares a mince pie with her. The two girls arrange to meet again, but Rinki doesn’t show and Blanche returns to her lonely existence. Blanche rescues an old horse, Rudi, and becomes a carter disguised as a boy.

Rinki does eventually meet up with Blanche. She has been adopted by two men and lives well. Teddy is a fashion designer and Jolly Garland is a ship captain – both careers are relevant to the story.

Without giving away the story, Blanche ends up at the North Pole living with some elves called Carol and a boy called Santa. Throughout the book, there are little links to our idea of Christmas that made me smile. Such as elves called Carol, a sailor called Jolly, a bully called Krampus and some magical paper called tinsel.

Blanche and Rinki work at their dreams despite Mr Krampus and being girls. They talk about admire strong women in history, including Boadicea. 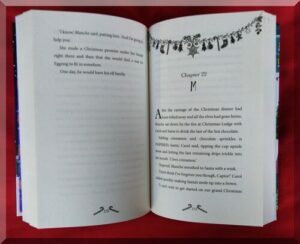 There are some unexpected pieces in the story (like who are the two men and how Carol treated the sailors) but it all ends nicely of course.

It is a decent sized book so I had a chance to get involved in the story. This makes it great for fluent readers, but younger readers may find it more challenging to read it alone.

Pounder has also written the Witch Wars and Bad Mermaids series, which I haven’t read but some of those with Tinsel could make a good Christmas or birthday present 🙂

Would I recommend Tinsel? As a novel or Christmas book for primary school kids, yes I recommend it. It’s fun, has adventure, includes some interesting characters, and has elements kids will enjoy and/or relate to.

I also recommend it as a good book for empowering girls and recognising women’s contributions over time.