What is a Hanukah Dreidel?

In Australia, Christmas is well known (and yes we’re slightly biased about that at Love Santa!) but there are other significant events and traditions in December.

One such celebration is Hanukah.

Also spelt Chanukah, Hanukah means dedication. It is a Jewish celebration of lights that lasts for 8 days. While not the most significant Jewish celebration, it has increased in prominence in recent years in response to Christmas celebrations in the western world.

Hanukah dates back to the second century BC (so about 2,200 years ago) when the Jews reclaimed their holy temple in Jerusalem back from the Greeks. There was little oil left after the Greeks left but they managed to light candles in the menorah for 8 nights. After 8 days, they had prepared a new batch of oil with appropriate rituals. 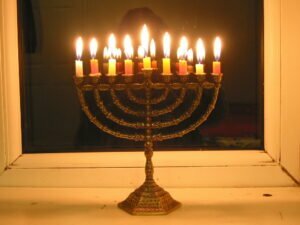 Traditions include lighting one candle a day for eight days in the hanukkiyah (a nine candle menorah – something like a candelabra), often putting the candles in a window or doorway, and saying certain prayers. Dishes cooked in oil are common in honour of the limited oil available at the temple – the most well known being latke (potato pancakes) and sufganya (jam filled doughnuts). It is also a time of many songs and singing.

Children were once given gelt or gifts of coins to reward positive behaviour and devotion to studying the Torah. The gelt was also to encourage children to give tzedakah (charity). Over time, this resulted in foil covered chocolate coins and the giving of gifts more like Christmas presents since the late 1800s.

Hanukah is part of the winter solstice – although it is summer for us of course! It can start on any day except Tuesday, and is on the 25th of Kislev. Kislev is a month in Jewish calendar which is lunar based so Hanukah start anytime between 28 November and 26 December in a western calendar. This year, Hanukah begins on the evening of Sunday 28 November and ends on Monday 6 December 2021. 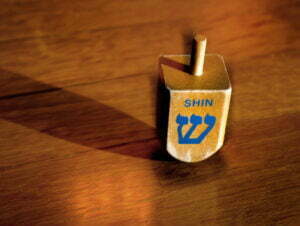 Another Hanukah tradition is playing with a dreidel.

A dreidel is a four sided spinning top. On each side is written a Hebrew letter – nun, gimmel, hei and shin. Together, these letters represent nes gadol hayah sham, “a great miracle happened there”. It is played by placing a bet on which letter the top will land on – the winner getting a pot of coins, nuts or similar.

Alternatively, children may have spin offs to see who can spin their dreidel the longest. 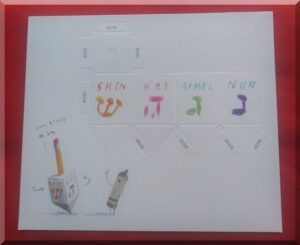 The crayon’s Christmas includes a cut out dreidel to make. You can see all four sides here