As a Foster Carer, Christmas has never been the same two years running. Luckily that’s just the way I like it! We have many lovely, touching memories of course but last Christmas really showed us that money spent and beautiful wrapping can be meaningless. Let me explain:

Christmas 2007 I had 3 children living with me, one of whom was a 5 year old with developmental delays, who had no memories nor understanding of Christmas. Her birth family life had been one of poverty and trauma, and she had no expectations as she had no reason to believe the magic of Christmas existed!

I had saved, bought and wrapped 6 gifts each for the 3 children and piled them beneath the decorated tree on Christmas Eve. The children had left cookies and lemonade out for Santa and carrots for the reindeer and I sprinkled fake, plastic snow across the carpet from the front door (no chimney!) to the tree before going to bed.

Christmas morning at 5:30 my other 2 children were up, waking me and keen to unwrap, having carefully counted and inspected their labelled gifts. Keen to begin, they roused the little girl and told her to run and see what Santa had brought. She came slowly out of her room, yawning and not in any hurry as she had no anticipation of goodies.

Then she stopped and began to laugh and jump up and down with happiness. “Mama, Mama” she yelled “Oh look it, look it!”.  Had she seen her mountain of gifts at last? No, her delight was in the $2.50 packet of plastic snow that Santa had left behind. 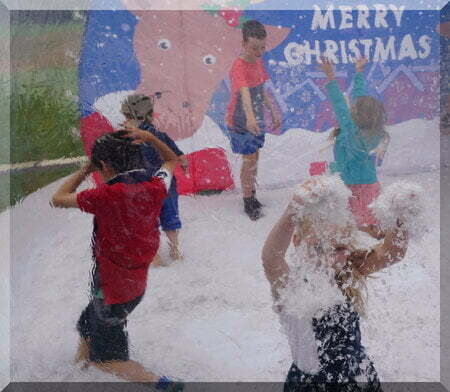 That little girl sat and threw ‘snow’ over herself for almost an hour laughing and calling to us to see the miracle that had taken place. Yes, she did come later and opened her gifts, but she was drawn back to play in the ‘snow’ throughout the rest of the day.