Santa is coming to Australia Santa in Australia – you gotta love that 🙂

The book starts with Santa and a little old elf preparing the sleigh and reindeer for his trip Down Under. It then covers the flight, including getting lost in cloud, and delivery of the gifts.

Santa is nice and cheery, a young reindeer is bright and finds the way to Perth’s Bell Tower, and Santa’s magic is throughout the book. So it was a fun and happy read.

Interestingly, Perth got the most mentions but Santa then went onto the other major cities (though one does wonder why he went to Alice Springs, then the east coast before going to Darwin!) One spread includes many recognisable structures, although predominantly Sydney and Melbourne, and the last page sees Santa flying home over Sydney rather than Darwin…

As a positive, the Santa-nav uses kilometres and there is no snow in Australia, Santa refers to little Aussies and ‘crossed the Equator and headed down under’. I was less happy with children leaving out ‘cookies and milk’ and a reindeer snack was left inside rather than out on the grass as I’ve always known to do. Astute children may ask why Santa went straight home after Darwin rather than delivering gifts to children in other countries (and my seven year old did notice!), but that didn’t detract from the overall story.

As always, it’s nice to see a book centred around places you know, so Aussie kids are bound to enjoy this book. And children elsewhere may well enjoy the story in its own right and get some interest out of seeing some views of down under! 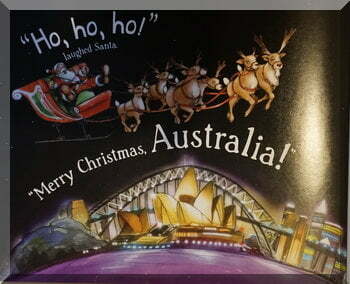