A gingerbread sleigh and reindeer

To celebrate Gingerbread House day (yes, there really is a day celebrating gingerbread!), ChristmasJen and I made some gingerbread to give Santa a sleigh.

We used a gingerbread recipe known to work well and a cutter set that I had grabbed from an op shop.

Using the cutters, we cut out two sleigh sides, two sleigh ends and four reindeer. My tip if you create a gingerbread sleigh – cut half the reindeer with the cutter upside down so some will face the other way for decorating. 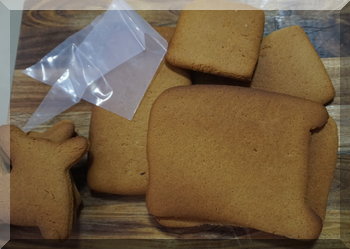 The set made this all very easy, but you could cut out cardboard templates instead – the ends are just squares and the sides were about 3 times longer with curved sections to look like a sleigh. Any other animal cutters may work if you don’t feel able to draw some reindeer templates!

So you will need gingerbread and icing, plus a board to sit your sleigh on.

To make the icing, start by beating two egg whites until they are white and form stiff peaks. 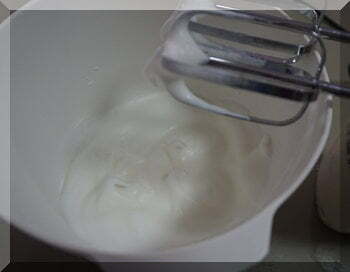 Stiff peaks in the egg whites are important

Then add icing sugar, about half a cup at a time, to make a really thick icing. I used 3.5 cups in total, and probably could have used more. Remember that thinner (ie runnier) icing takes longer to set so you will end up holding pieces together for a while. Stiff enough to hold up a spoon!

Lay out your gingerbread pieces and pipe some icing to stick them together as a sleigh. 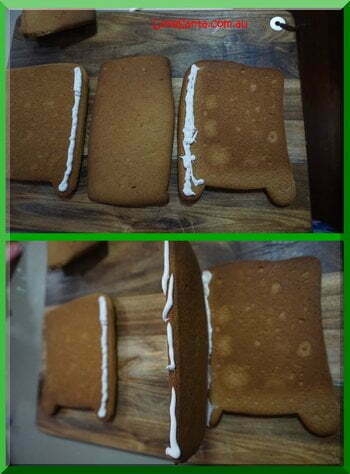 The reindeer were easier to decorate lying down, but the sleigh can be decorated once it is put together – especially if you want to decorate the back of the sleigh. Some of the lollies used on our gingerbread sleigh

My son had a wonderful time using the remaining icing to stick on Smarties, candy canes and lolly cupcakes. 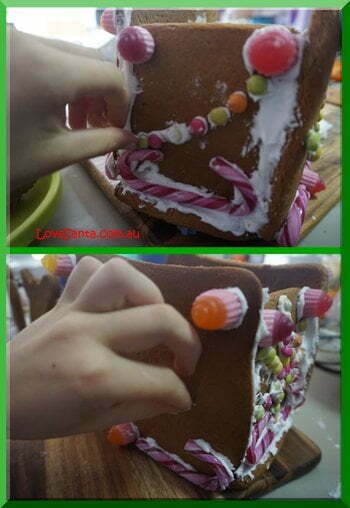 He was generous with the icing as he attached lollies!

To finish off our sleigh, we added a marshmallow Santa on top.

Decorating the reindeer was quick and simple – and we added a glacé cherry to one to be Rudolph! 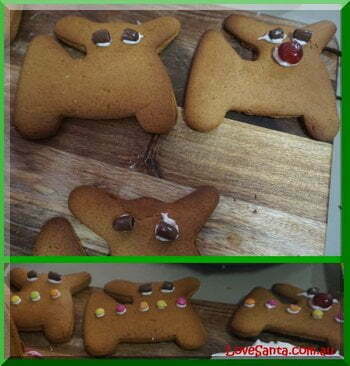 They gained personality as added decorations!

Then we ran long streams of snow (also known as icing!) out in front of the sleigh and stood the decorated reindeer in the snow. This is where stiffer icing would have helped as I need supports for the reindeer for a little while as the icing fully set.

We used some sour pencils to form the reins between the sleigh and reindeer, and we were done! 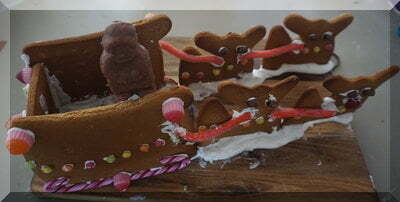 It was a lot of fun to make Santa’s sleigh. And the reaction at a local Christmas party when I presented the sleigh was priceless! There were compliments from adults, but more striking was the amazement and wonder on lots of little faces – I do love delighting young children! It didn’t take long for there to just be an empty board with bits of discarded icing…