A week or so ago, I was surprised to see a Christmas tree decorated with golliwogs. 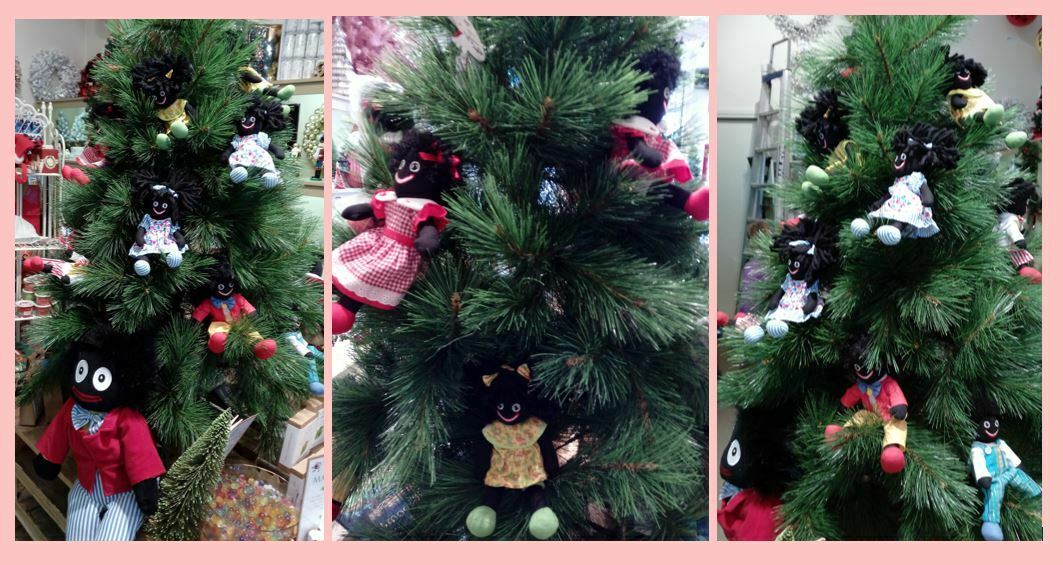 A Christmas tree decorated with golliwogs in 2017

It was different to see soft toys as the key decoration of a Christmas tree, but it still was colourful and cheery. And all the children I was with enjoyed looking at it.

However, it was the use of golliwogs that really surprised me.

For one thing, I don’t think I’ve ever seen that many golliwogs in one place – they are certainly not a common toy these days.

But mostly it was a surprise because so many people see that as racist and denigrating certain people. I certainly wouldn’t want to offend someone with my Christmas tree decorating (they don’t have to like what I do, but I wouldn’t want to actually upset anyone) and I wondered if it was particularly wise for a Christmas shop to have this display.

What do you think – are you offended by the use of golliwogs on a Christmas tree?

I grew up with golliwogs being a soft toy like any other – yes it was black but I didn’t see it at any different to a rag doll or teddy bear. And I never heard anyone use them or speak of them in anyway that was racist. So in that sense they are innocuous toys to me, and I actually like that there were some toys with coloured skin rather than all being white.

However, I can see that they have been used inappropriately and appear as an unkind caricature of black people. Things like Nazis banning them as ‘German children should only see Aryan appearances as desirable’, and Enid Blyton’s books showing golliwogs as car thieves and villains. And people being called ‘golliwog’ in offensive and derogatory ways is not acceptable.

I would never give one to a child or praise them now.

Interestingly, the name golliwog came from a book by Florence Upton where the character was called golliwog (and was drawn like the toys appeared). Golliwog was based on a blackface minstrel, which is often classed a racist tradition itself. He was called ‘a horrid sight’ at first but given a nice character, and later described with a ‘kind face’.

One toy manufacturer has given a history of golliwogs (or golly dolls as they call them) originating in Egypt as ghuliwogs that acknowledged Egyptian labourers for the British army at the end of the 19th century. The name is a combination of WOGS (working on government service) and Ghoul (Arabic for desert ghost).

Florence used an old black doll as a model but said “without intention of naming him, without the idea of a name passing through my mind, I called him ‘Golliwogg’.”

Having become less and less popular in the 1970s and 80s, golliwogs somewhat disappeared but have reappeared in the last few years. I personally don’t see why they should be back – yes, there is some nostalgic attachment for some people, but they are associated with racism. I agree with having more toys showing diversity, but that can be done without using dolls with clown mouths, servant costumes and racist connotations.

In the words of Suzanne Moore, “This is exactly how these wretched things ended up back in the shops. Two things have been going on: the ongoing lie that political correctness (basically, manners) has gone so mad that an open display of racism brands itself somehow as an exercise of freedom. Such people always hark back to a time of “innocence”. That innocence is now called white privilege.

The other is the lie that we live in a “post-racist” society. This is a view that is often expressed in Australia, where golliwogs are extremely popular. Yet if you go to any of the Australian websites selling them, you will see the vendors go with the word “gollies”, leaving out the obviously offensive bit.”