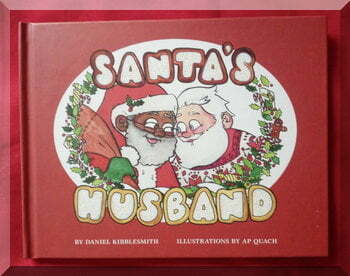 3 or 4 years and up, but read our review first!

Newly released, this is a different take on the Santa story!

Described as the true story of Mr and Mr Claus, this book tells about the real Santa and how is helped by his husband.

I loved this book, but am aware that others may not like the content and I strongly recommend reading it before sharing it with children (so you are prepared for any questions that may arise).

Ready for the shock? In this book, Santa is both black and gay. The Santa we are used to seeing is actually Santa’s white husband, named David. Personally, I have no issues with either coloured skin or gays so this didn’t bother me – but if it does bother you, this book will challenge you.

For younger children, it can just be another version of Santa. For children a bit older, it can also be a catalyst for some interesting and important conversations (gay marriage, racism, dietary restrictions, differences between Santa images and why people get angry about such things). For adults, it is surprising, refreshing and funny!

There is some humour included which makes it fun for adults without being inappropriate for younger readers, such as keeping each other cosy in winter and sooty footprints all over the floor annoying Santa!

Quach has drawn some colourful and engaging pictures of Santa and his husband, and the writing itself is well done.

Overall, the book has a number of positive messages – primarily, acceptance of differences (“Who is anyone to say what the real Santa looks like?”) but also the concepts of working together and making up after disagreements.

Do I recommend this book? Absolutely! I think this is a fantastic Christmas book that should be in every home.