Pirates is not usually something I associate with Christmas, but this book puts the two together with humour, rhyme and action.

A crew of scurvy pirates, savage as a stormy sea, did a dreadful thing – they tied poor Father Christmas up and went to get some loot.

My 9 year old read this to me and we both enjoyed it. The story moves along at a nice pace, with rhymes and colourful pictures.

While Santa and the children in the book are definitely humans, the illustrations show the pirates as robots – this is not part of the text so maybe it is just quirky or maybe it makes the book less scary for youngsters worrying about pirates hurting Santa.

I liked that it took the pirates a while to get the hang of flying the sleigh 🙂 But once they did, they stole every Christmas thing and took it back to their pirate ship (luckily it didn’t sink the ship!) for a grand old party.

Shhh, Pip the cabin boy saves the day, freeing Santa and allowing Christmas to be returned to the children of the world before they woke on Christmas morning – so there is a happy ending. The pirates had to return everything – I like that they fixed their own mistake effectively rather than being punished, giving a positive message.

Would I recommend it? Absolutely – A very pirate Christmas is a fun read, Christmassy and gives positive messages. It is a bit different to your average Christmas book and may therefore have more appeal to some adventurous children or those who are a little bored of the same ideas repeated. 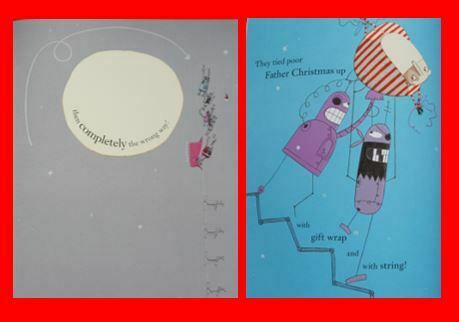