Day one – found sitting on the Christmas tree that they brought down from the attic! There was a letter from Santa and a gift for the kids hidden near by. Day two – Tinkles and baby Ginger were found in the kitchen sitting on top of a tin Christmas tree they had made! 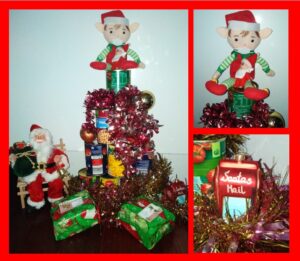 Day three – It took a bit longer to find the elves this morning, although they were hiding in plain sight! We eventually found them sitting in a photo frame on the mantlepiece. Day four – Tinkles was doing the splits – there has been discussion whether she was using the weights for support or was lifting weights whilst doing the splits! Ginger was resting on top of a larger weight. 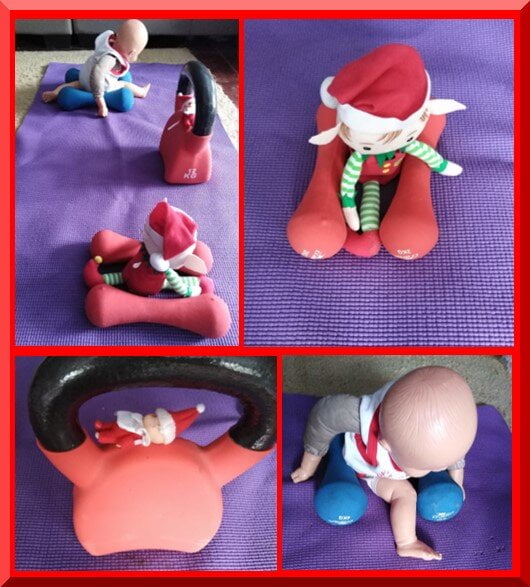 Day five – Ginger was lying in the cutlery drawer with the soup spoons, whilst Tinkles sat in the Lego garage.

Day six – It appears Tinkles was missing the North Pole as we found her wrapped in a Christmas tea-towel inside the fridge! Ginger, on the other hand, took much longer to spot in our popcorn container in the pantry. However, by the time the kids got home from school, she was sitting in a bowl of popped popcorn! 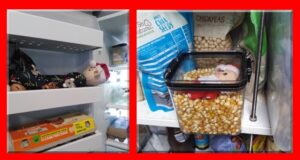 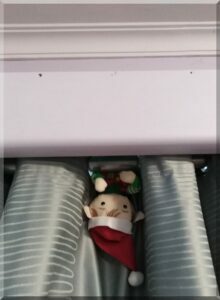 What has your elf been up to so far this year?