Last weekend I had the chance to play Christmas Monopoly with a friend who loves Christmas at least as much as me!

We had a lot of fun playing it and being amused by the Christmas elements of the game.

What is Christmas Monopoly?

So it’s all basically the same as the classic game of Monopoly but made Christmassy! 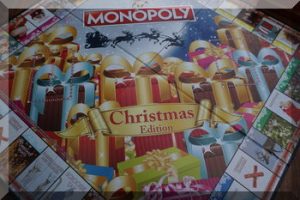 At the simplest level, the differences are

We had fun playing Christmas Monopoly with seven and nine year olds, and had to apply a time limit to have an end point. Like most board games, it is a good way to spend time together and let kids (and adults!) practice some maths skills and strategic thinking. 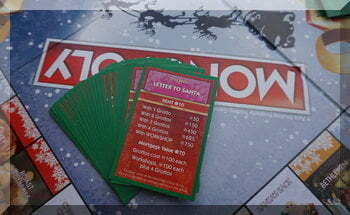 Some of the property ideas were cute – the yellow set is Christmas Pudding, Brandy and Cream, and my favourite was the pink set containing Santa Letters, Christmas cards and Christmas shopping! And we liked the reindeer instead of train stations!

Less endearing was a roast chicken or turkey as a game token. It seemed out of place (maybe a turkey would work for a Thanksgiving game in America, but not Christmas!) and there are other ideas they could have used like a gift, a Christmas tree or a Christmas stocking. Note there was a Christmas pudding token so food was covered already.

My first Santa’s Sack and Christmas Crackers were both ‘get out of jail free’ cards, and one came in handy a bit later on in the game. Other cards included regifting something from last Christmas, taking friends out for Christmas drinks and getting a present you like.

The role of Santa was overplayed, though. Yes, I know that seems strange for me to say as I love all things Santa, but it’s true! Santa was a game token, the name of a property (replacing Mayfair of the original game) and the banker. It got a bit confusing in explaining the rules and talking about snowflake change when buying Santa and paying Santa…

The elves, chimneys (utilities from the original) and reindeer cards all had very cute pictures on them which we enjoyed. The kids were worried something was wrong, however, when they bought properties and those cards didn’t have pictures on them. 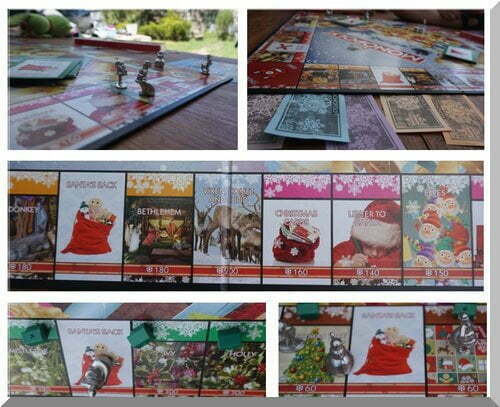 On a practical level, the instructions were clear, both explaining the game and differentiating from the original game. Unfortunately, the divider for the snowflakes didn’t have enough sections for all the denominations (two denominations had to be placed elsewhere) and can’t be used for storage. 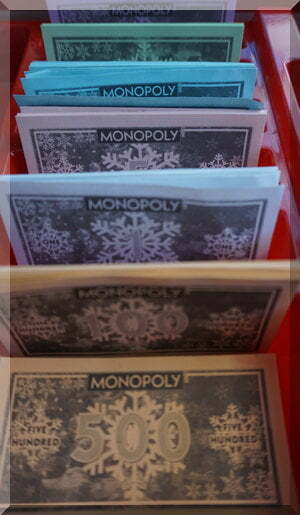 So if you like the idea of themed Monopoly games, I also discovered that there is Nightmare before Christmas (with Tim Burton) monopoly, Rudolph the Red Nose Reindeer Monopoly and A Christmas Story monopoly! Have you already tried one of those games? If so, let us know what you thought!