The Magic of Christmas in Central Australia

While Christmas tree festivals may not be well known in much of Australia, guides in Alice Springs ran a community Christmas event between 1996 and 2001.

One of the founders of this event, Karen Byrne, was kind enough to share the following article and photos… 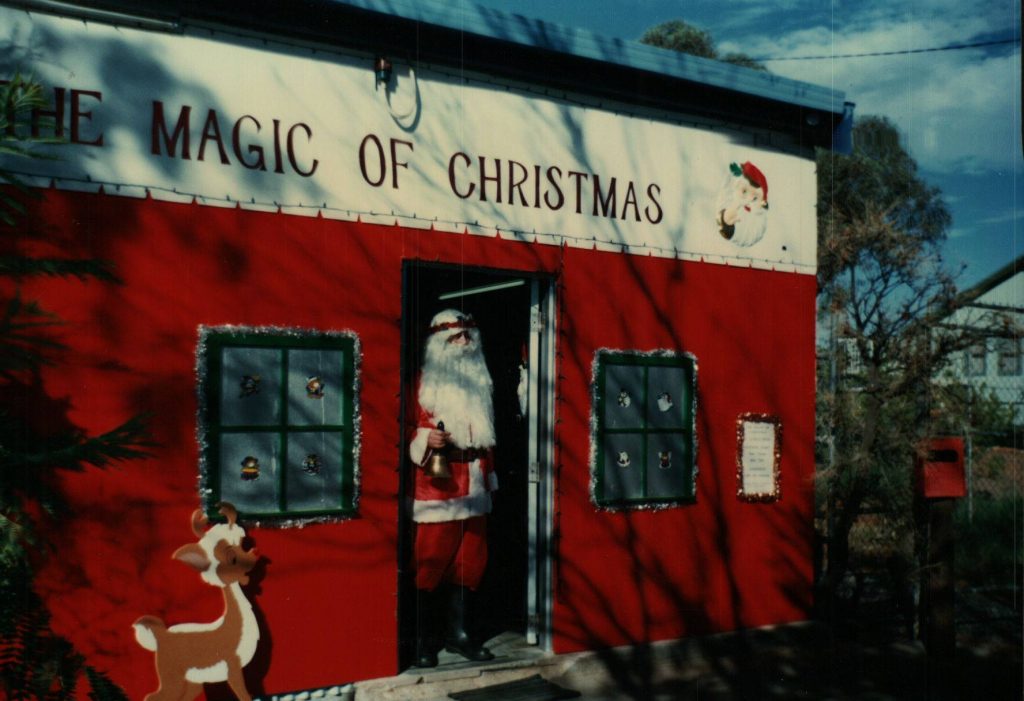 Written by Margaret Rudwick for Guiding in Australia, March 1997.

Karen Byrne and Sue Ride sat relaxing outside a local church one afternoon, guarding the white balloons they had just blown up, each with a paper dove attached, ready for the annual Peace Day service.

It occurred to them that there were a number of community–wide activities run each year by local organisations, but Guides in Alice Springs did not have one. And so a crazy idea occurred to them – why not do something special for the people of Alice Springs, and in doing so, put Guiding on the annual calendar?

“Crazy,“ says Sue “because we should have known what we were letting ourselves in for!”

“I’d always had an idea we could do something at the Guide Hall for families, something affordable,” says Karen, “and as no–one else in town had a major Christmas activity it seemed just the thing to do.”

And so the Magic of Christmas was born.

Planning the Magic of Christmas

Plans were made, and not on a small scale!

The whole of the Guide Hall was to be decorated, a dozen or so distinct displays set up, and local families encouraged to come and share together the Magic of Christmas.

Local suppliers were generous with their donations and not one knock–back was received in a whole day of canvassing the town, although there was some confusion over the collectors’ enthusiasm for “rubbish” in the form of polystyrene sheets & boxes!

The Trefoil Guild donated $500 which was the only cash received and enabled the purchase of the crepe paper (yes, we used a lot of crepe paper!) The Support Group provided the bags of sweets for Father Christmas to give out. Members of both these groups gave of their time and skills throughout the opening hours, adding to the Magic for all the visitors.

About two weeks before opening day, the real work started. 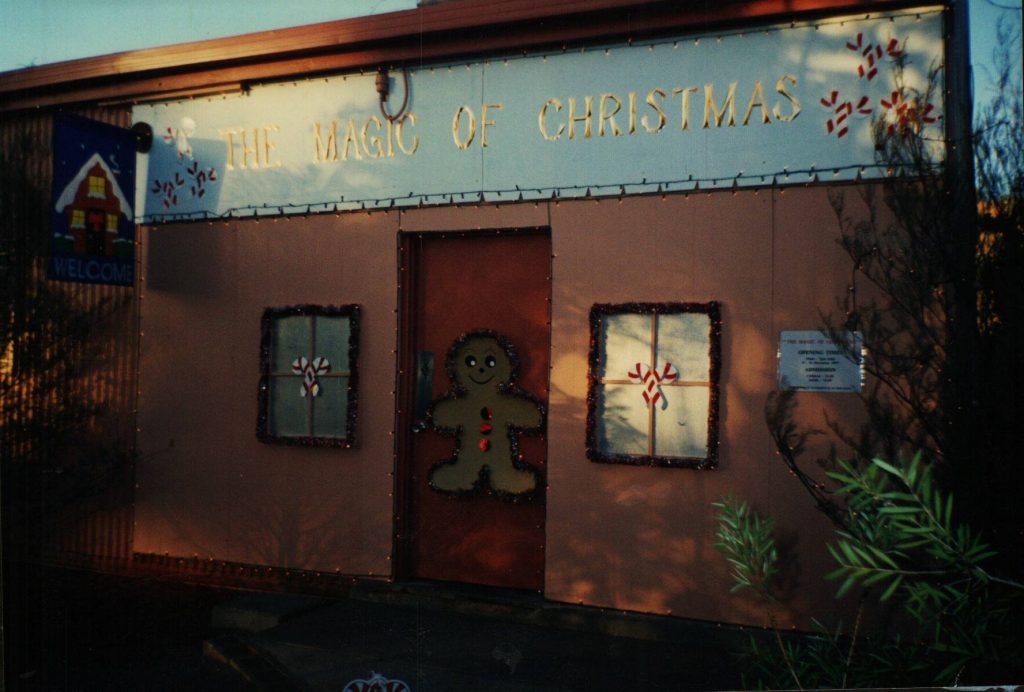 The making of the Magic of Christmas

All four interior walls of the hall were to be lined with red, white and green crepe paper – this had to be double thickness to hide the murals on the walls. Now the hall is quiet a reasonable size so this is no mean feat! Although a large quantity had been special ordered there never seemed to be enough so Sue’s mother, Joan Higgins, was kept busy scouring the town for more. One of the complicating things was that different brands came in different shades so acquiring just what  was wanted was really difficult.

“Have you ever covered a hall in crepe paper?” asks Karen. “You get it up nice and firmly, and then you go home for the night.”

“But, horror of horrors,” Sue adds, “when you walk in next morning all the even, straight paper you left the night before has sagged and gone all crinkly overnight. It took us a while to realise it was just the unseasonable humidity. By mid morning, it would be dried out and look fine again.”

“Even though it happened each night we still worried about it each morning,” says Karen.

Once the crepe paper was up – and there are stories of ladders, and chairs on tables and other indescribable ways of doing the job – the setting up of displays could start.

A false front made the hall look like a little red Christmas house complete with a letter box for posting letters to Father Christmas – all of which were answered. Inside, the focal point was to be Father Christmas at the far end.

From the entrance and down each side were almost a dozen separate themes including:

Devonshire tea and coffee was supplied by the trefoil Guild, and they also ran a small raffle. There were treats for the children there, too.

There was a children’s play area with games, a video and a train set for the young ones who did not need (want!) to spend so much time looking at the details.  In fact, not a part of the Guide Hall was left undecorated – streamers, snowflakes and stars covered the ceiling and angles, and novelty trees, lanterns and candles added to the magic in corners and on the floor. Glitter covered the carpet.

Sue and Karen are adamant it was well worth it. “Our families didn’t see us at home very much for a couple of weeks,” says Karen, “but they came along and helped us!”

“And help us they did – we would never have done it without their fantastic support,” adds Sue. “And not just by helping us to put up the displays either. Karen’s husband, Greg, had to manage without his hat and my husband, Graham, lost his boots to the swagman! Whilst Karen’s children Raymond and Rene talk of leaving town at Christmas time, we suspect they will be there again offering their tired mum a coffee in bed, or waiting tea until everyone is home at 10pm.”

“Home” says Karen wryly “was where they went to escape the crepe paper, and the monotonous diet of cold coffee and guide biscuits!” Over 1,000 families visited the hall in the time it was open and entry was free.

And was it worth it?

“Just to see the children’s faces made it  worthwhile” said Karen.

Father Christmas was always there no matter what time a family dropped in. If he wasn’t sitting in his chair he would always appear within a few minutes of someone’s arrival and he had a bag of lollies for all his young visitors.

Each child had their photo taken with Santa, with the photo being available for sale next day, and although there was no obligation to buy, most people did come back a purchase a copy.

Planning is already well in hand for next Christmas. Bigger and better things are planned and there will be many changes, including more activities and visitor involvement, and some moving displays.

Families will be charged a gold coin donation to enter, not to make a profit, but to improve the displays for the following year. School groups will be admitted free during the day.

But crepe paper will be out – paint is in next time!

“What we set out to do was make a Christmas spectacle on a shoestring – to do something anyone, anywhere could do. All you need is unlimited imagination,”  says Sue.

“If two housewives in Alice can make the Magic of Christmas, then so can anyone else in any other small town in Australia,” says Karen. 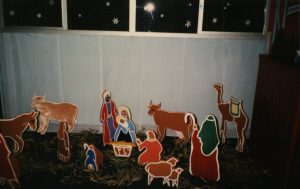 Karen further told me “We had so much fun doing it and seeing the faces of the kids was great!

“For me personally, I loved the fact there was somewhere Mums could take their kids on a hot day and not have to say no all the time. The relaxation on their faces was obvious – it was too demoralising visiting the air conditioned shops every day when on a tight budget so they appreciated the Magic of Christmas. Many returned several times!”

SO maybe there is a challenge to us all – set up our own tree festivals or complete Christmas displays like the Magic of Christmas!